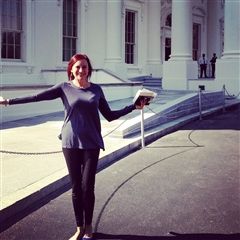 702-949-3600 x321
jlindley@adsrm.org
Jolie Lindley earned a bachelor's degree from Butler University in 1992 with honors in journalism and a theatre minor. In 1994 she completed secondary education certification from Butler in journalism, theatre and speech and added an English minor to her license from Indiana University. She completed a master of liberal studies degree from Indiana University in 2004, with emphasis in journalism, speech and English literature.
Prior to coming to Dawson in 2013, Lindley taught journalism, English, theater, speech and dance for 17 years in four different public high schools in Indiana, where she served as adviser to nationally and regionally-award-winning student newspapers and yearbooks. She was nominated for a Disney Teacher Award, was named a "hero for the new millennieum" by the Louisville Courier-Journal and was nominated to Who's Who Among American Teachers by former students. Additionally, Lindley has served on the board of the Southeastern Indiana Student Press Association, was a featured speaker for Ball State University J-Day in 2012 and has taught workshop sessions at numerous National Scholastic Press Association conventions and regional Jostens yearbook workshops. She enjoys acting, dancing, reading, writing and is an expert skier. She is also a huge Butler University basketball, IU basketball, Indianapolis Colts and Indiana Pacers fan.
Back