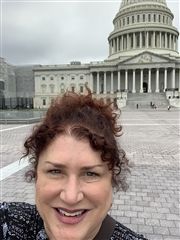 702-949-3600 x408
sboyum@adsrm.org
Sue received her Bachelor of Arts in Music, Theatre and Education from Mount Marty College in Yankton, South Dakota, and her Master of Arts from The University of Iowa. She is a credentialed teacher and holds teaching licenses in Iowa and Hawaii.
Sue grew up in South Dakota and moved to Iowa as a young teacher to begin her career in the Parochial School System followed by the Iowa Public School System. After many brutal winters, Sue made the trek across the Pacific with her family to Hawaii in 2003 where she taught both in the Public Charter School System and Independent Schools. In 2013, she hopped back across the pond to be six hours closer to family and to teach in Seattle, but after three years of "sunless" skies, she decided to venture to a warmer climate.
Throughout her career, Sue has directed many youth theatre and vocal ensembles. In addition, Sue has served on several boards including The Kona Music Society, The Aloha Performing Arts Company and Innovations Public Charter School. She enjoys acting in her spare time and holds many community theatre honors. Sue is thrilled to be a part of the Dawson Difference and looks forward to making her sixth year here at Dawson the best yet!
Back